Deprecated: The each() function is deprecated. This message will be suppressed on further calls in /home/fantas99/public_html/components/com_jreviews/jreviews/models/configuration.php on line 69 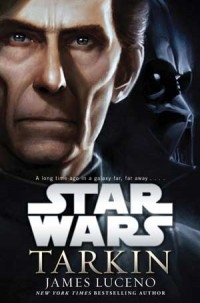 Genre
Science Fiction
Subgenres
Space Opera
Author
James Luceno
Bestselling Star Wars veteran James Luceno gives Grand Moff Tarkin the Star Wars: Darth Plagueis treatment, bringing a legendary character from A New Hope to full, fascinating life. He’s the scion of an honorable and revered family. A dedicated soldier and distinguished legislator. Loyal proponent of the Republic and trusted ally of the Jedi Order. Groomed by the ruthless politician and Sith Lord who would be Emperor, Governor Wilhuff Tarkin rises through the Imperial ranks, enforcing his authority ever more mercilessly . . . and zealously pursuing his destiny as the architect of absolute dominion. Rule through the fear of force rather than force itself, he advises his Emperor. Under Tarkin’s guidance, an ultimate weapon of unparalleled destruction moves ever closer to becoming a terrifying reality. When the so-called Death Star is completed, Tarkin is confident that the galaxy’s lingering pockets of Separatist rebellion will be brought to heel—by intimidation . . . or annihilation. Until then, however, insurgency remains a genuine threat. Escalating guerrilla attacks by resistance forces and newfound evidence of a growing Separatist conspiracy are an immediate danger the Empire must meet with swift and brutal action. And to bring down a band of elusive freedom fighters, the Emperor turns to his most formidable agents: Darth Vader, the fearsome new Sith enforcer as remorseless as he is mysterious; and Tarkin—whose tactical cunning and cold-blooded efficiency will pave the way for the Empire’s supremacy . . . and its enemies’ extinction.

Star Wars:Tarkin by James Luceno is one of the latest books in the Star Wars universe. I have read about a dozen Star Wars books over the last few years and enjoyed most of them. Unfortunately this book was not as enjoyable. I am not going to rate this book as I did not finish it but I will tell you a little about why I didn't finish it and then you can make your own judgement. For those that have read some of my past reviews you know I can like almost any book with interesting characters. Tarkin, however, after reading 40 pages of the book over several weeks was not an interesting character to me.

The book starts with Tarkin in charge of building the death star on a very remote planet. His days involve managing a massive construction project and deciding on the look of his new uniform when he gets an alert that one of his suppliers is being attacked. He shows his intelligence as a leader based on how he handles this alert but the overall situation was not a memorable event. The story then goes on to tell of his youth growing up in a driven family that sets him off to learn survival skills with his great-uncle in a deadly world.

I think my main issue with this book is that Tarkin is a number two in charge of administration and the general military for the Empire. As such he was always a minor player and in all other stories was outshined by the bigger than life personalities of those around him such as Darth Vader and the Emperor. He is also has a very reserved, analytical personality that is great for administration but not that entertaining as a story.

Perhaps the story picks up after the first forty pages so I won't give this book a review based on not finishing it. If you are an avid Star Wars fan you could check this out but I have read many Star Wars books that I enjoyed and would recommend before Tarkin.