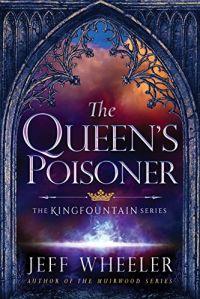 King Severn Argentine’s fearsome reputation precedes him: usurper of the throne, killer of rightful heirs, ruthless punisher of traitors. Attempting to depose him, the Duke of Kiskaddon gambles…and loses. Now the duke must atone by handing over his young son, Owen, as the king’s hostage. And should his loyalty falter again, the boy will pay with his life.

Seeking allies and eluding Severn’s spies, Owen learns to survive in the court of Kingfountain. But when new evidence of his father’s betrayal threatens to seal his fate, Owen must win the vengeful king’s favor by proving his worth—through extraordinary means. And only one person can aid his desperate cause: a mysterious woman, dwelling in secrecy, who truly wields power over life, death, and destiny.

Nice story about a young boy held hostage by a disliked king
January 12, 2017
Rating
4.0
The Queen's Poisoner is a fantasy book about a young boy named Owen and the first book in The Kingfountain Series by Jeff Wheeler. Owen is the youngest son of a lord that is a traitor to his king because he withheld his assistance during a battle expecting the king would lose the battle and die. Instead the king defeated his enemies and took Owen hostage because of his father's disloyalty.
The king is disliked and disfigured and rumors exist that he had his nephew's killed in order to gain power. Owen has to gain powerful allies within the king's castle in order to survive. He meets the Queen's Poisoner who teaches him useful skills and also creates an illusion that Owen can see the future in his dreams. People with powers are considered fountain blessed and are very rare and people that can see the future are even more rare.
This was a very good start to what sounds like a promising series. The descriptions of the castle kitchen along with the people that Owen gets to know makes you feel like you know them and care about them. I liked the book and plan to pickup the next book in the series at some point. However, the book while intimate did not have a very dramatic or surprising conclusion. I am not sure what the hook will be to get me to want to read more. I therefore give it four out of five starts and recommend it to people who like the fantasy genre.
F
Fwwadmin #1 Reviewer 122 reviews
Report this review Comments (0) | Was this review helpful to you? 0 0