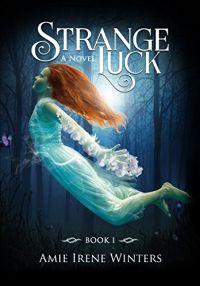 Hidden deep in the forest, beneath mounds of forgotten memories,
lies the secret world of the Nameless – a magical realm as beautiful as it is dangerous.

Daisy Darling used to think of Sea Salt, the small mountain town she has always called home, as a boring place where nothing ever happened. Then she met a peculiar wanderer who reveals a mysterious world hidden beneath the town all along. A world where mind-bending, magical, life-altering phenomena happen. A world harboring a dark secret under its snow-capped mountains, aquamarine waters, and perfumed jungles. A world built using stolen memories.

Now that Daisy’s eyes have been opened to the truth about the Nameless, there’s no turning back. Driven to save the other Collectives, Daisy is pulled deeper into the world’s tangled lies, finding herself ensnared in a dangerous network of tunnels and time-altering portals. Somehow Daisy must discover the strength within her to win back her freedom before the Nameless claims her forever.
Tweet