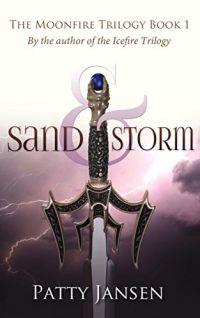 The ancient machine that produced icefire was destroyed twenty years ago, but the deadly magic is again on the increase. No one understands why or where it's coming from.

Icefire controls the weather and massive changes in weather patterns plunge the northern half of the inhabited world in deep drought. The tide of refugees swells, but as long as no one knows where the icefire is coming from, nowhere is safe.

King Isandor sends people to investigate a concentration of icefire in the mountains at the border, but two consecutive patrols both vanish. It appears that, after having suffered badly in wars, the neighbouring country Arania is on the offensive, and is using icefire as weapon. Their culture is harsh and their barbarism knows no boundaries.

Meanwhile two young meteorology students make a string of discoveries about icefire that will change the way the people understand the world. They're on the threshold of the age of enlightenment, but vital knowledge necessary to save their world may well get lost when war overruns the inhabited world.
Tweet

Slow at first but grows on you with interesting characters
February 07, 2017 (Updated: February 07, 2017)
Rating
4.0
Sometimes reading a book is a process that takes several months. Sand & Storm was one of those books in that I bought it back around June 2016 and just finished in February of 2017. Admittedly I didn't start reading it until after late October though. I'm not that slow of a reader!

It is hard to explain why it took be so long other than to say I just didn't sit for long at any one time while reading it.

The world has several well developed and diverse characters in it but I think the problem I found was that this first book moved pretty slowly without a major hook that kept me reading. Sure there were plenty of people that were living their own lives in the world but no one character really jumped out as extremely interesting.

The funny thing is that once I finished the book I find myself wondering what happens in the second book of the series. There is a war brewing, a romance building between a young, educated noble woman and the King, an interesting female engineer, a barren Queen, huge rideable eagles, deadly magic, and something weird going on in the desert that a young meteorologist can't keep his nose out of.

So if you like fantasy stories with some unusual twists and don't mind a slow build up give Sand & Storm a try. I give it four out of five stars and even have two completely free ebook copies available to the first two people who redeem them. No purchase necessary but when they are gone they are gone.

Parental advisory: I don't recommend this book for children as there is at least one graphically violent scene between a man and a woman that is a key part of the plot.